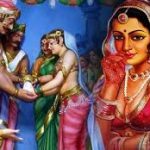 In her previous birth, Mandodari had been a celestial damsel (apsara) named Madhura. Madhura went to Kailasa to worship Siva, having observed a special vow, the Somavara vrata. When Madhura reached Kailasa, Parvati, Siva‘s wife, was not there. Madhura worshipped and praised Siva. But they were attracted to each other and made love. When Parvati returned to Kailasa, she saw Madhura’s breast smeared with the ash from Siva’s body. Parvati went into a great fury and cursed Madhura to live as a frog for twelve years. Siva was grief-struck. He con­soled Madhura that after twelve years she would become a very beautiful woman and would be married to a great king. Madhura became a frog in a well.
Maya, an asura born to Kasiyapa and Danu, was married to Hema, an apsara. They had two sons, Mayavi and Dundubhi, but also wanted a daughter. Fortwelve years they prayed to Siva for one. One day as Maya and Hema were wor­shipping (Siva, they heard a cry for help from the nearby well. They found a beau­tiful young woman in the well. They adopted her and named her Mandodari.
Mandodari was married to Ravana—certainly a great enough king. Mando- dari was very pious and noble. She tried to dissuade Ravana from tormenting Sita, the wife of Rama, and warned him that his actions could prove to be fatal. Mandodari was also described as one of the five ideal women in Hindu mythol­ogy (pancakanyas).