Skip to content
Home Hindu Mythology MARICI – A Marut; a Prajapati; a maharishi

MARICI – A Marut; a Prajapati; a maharishi 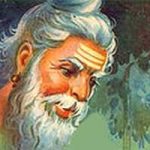 Brahma created Marici, whose life remains clouded in some mystery. His great­ness cannot be doubted, but some say that he was a Marut (one of a group of gods associated with Indra, thus gods of storms and battle). Others that he was a Prajapati (progenitor or grandfather), or even one of the seven maharishis (sapta-rishis), who were also the seven cosmic principles. In the Brahmanda Purana his wife was Anasuya (without spite). According to the Bhagavata Purana Marici (light) and Urna married and had six sons so powerful that they rivaled the cre­ator. One day when they saw Brahma, they mocked him, saying that he was a father who had married his own daughter (Sarasvati). Brahma cursed them to be born as demons. So these six had rebirths in two important incarnations of Vishnu as sons of demons—of Kalanemi and then of Hiranyakasipu—and one as humans, as sons of Vasudeva and Devaki.
In the Mahabharata Kasiyapa-Prajapati was only the son of Marici, who was one of the six mind-born sons (manasa-putras) of Brahma. The Valmiki Ramayana added Kasyapa as the seventh and youngest sons of Brahma and thus a brother of Marici.