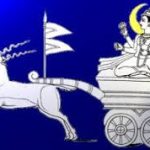 The Maruts were said to be sons of Rudra, sons or brothers of Indra, sons of the ocean, and later sons of Kasiyapa-prajapati (a progenitor). In the Rigveda they were associated with Indra, god of war, and Vayu, god of wind. Perhaps they were storm gods; certainly they helped in the fight against the ancient monster, Vri- tra. They seemed to know the art of chanting, as they could intone appropriate Vedic verses. Later their numbers increased from 27 to 180.