MAYA – A concept; the creative power of god 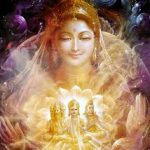 There is no concept in Hindu religion, philosophy, and mythology that, when oversimplified, has led to more misunderstanding. The phrase “it is all illusion, maya” reflects this kind of usage. In fact the concept of maya is complex, and its meaning depends on the context; it is central to understanding Hindu mythology. The concept of maya provides the supporting structure both for the magical effectiveness of the austerities and powers of Hindu mythology and for a fundamental rejection of any worldview that involved taking such illusions seriously. Other details about this contradictory usage of the concept of maya are found in the last two sections of chapter 1.
Linguistically, maya comes from the verbal root ma—“to measure,” “to mete out,” and by extension “to create” or “to construct.” Maya implied a power or a process of creation and the results of that process. Thus, in the Rigveda Varuna used maya to construct the earth and give it order (rita), and Indra used maya to conquer Vritra, the monster who prevented the rains. By the time of the Upanishads, maya was beginning to acquire at least five contexts of meaning with many possibilities for overlapping—ritual, metaphysical, episte- mological, mythological, and magical. All agreed that maya had to do with the enigmatic qualities of life and the consciousness of life. Metaphysically and epis- temologically, maya pointed to the process of mental creation and its corre­spondence to material creation. It entailed how we know, what we know, who knows—and so much more. This theoretical usage of maya would allow for a contradiction or rejection of the practical usages of maya—roughly correspon­ding to ritual, mythological, and magical approaches.
As discussed in chapter 1, the practical understanding of maya (and shakti) as power rested on a “science” of observation and experimentation that supported their application in ritual and ascetic practices. Orthoprax priests had concluded that rituals worked when done precisely, as did incantations of mantras as prayers of praise or formulas of magical control. Further, this understanding of maya as control of the mysteries of life concluded that austerities (tapas) led to the power to control nature, including the gods, or to acquire any object of desire, including heaven (svarga) or immortality. The mythological view of maya is the most practical one: that there are practices (rituals, austerities, devotion, or a combination of these) that give mortals some control over the results of their action (connecting with karma) and hope for the future. Many, many myths men­tion the use of magic directly, and many terms are used in the myths for this art: for example, mayavi or tapasvini (magician) and indrajala (magic or illusionism).