Skip to content
Home Hindu Mythology MITRA – One of the twelve adityas; a sun god

MITRA – One of the twelve adityas; a sun god 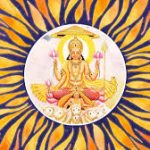 In the Rigveda Mitra’s name was often associated with Varuna. One chapter (Sukta) in the Rigveda said that if Mitra and Varuna were prayed to, the result would be an abundance of rain. Mitra was also glorified as the god of night and as ruling the earth and sky, together with Varuna.
In the Puranas Mitra was a son of Kasiyapa-prajapati (a progenitor) and Aditya. By the time of the Vishnu Purana, there were twelve adityas. The other eleven were Vishnu, Sakra, Aryama, Dhata, Tvashta, Purusha, Vivasvan, Savita, Varuna, Bhaga, and Amsa.