MOHINI – The feminine form of Vishnu 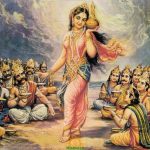 Mohini appeared at the churning of the Milky Ocean, again for the birth of a river and a divine monkey, and then for the incarnation of a sage.
In order to prevent the asuras (demons) from obtaining their share of the divine nectar of immortality (amrita) that was produced from the churning of the Milky Ocean, Vishnu transformed into a beautiful women, Mohini. The asuras, led by Jambha, were beguiled by her charm, surrendered the pot of amrita they had taken from the sage Dhanvantari to Mohini to divide equally among them, and went to bathe at her request. Thus, by the double deception of shape- shifting and untruth, Vishnu saved the amrita for the devas (gods).
Siva heard about this gender transformation and wanted to see this form of Vishnu. So Siva persuaded Vishnu to appear again as Mohini. Upon seeing her great beauty, Siva became excited and made love to Mohini. The sweat that was produced during their love play fell down and turned into a river called Gandaki, according to the Skanda Purana.
Hanuman was also born from an encounter between Siva and the feminine
form of Vishnu as Mohini. The semen of Siva was deposited in the womb of Anjana by the seven Rishis (sapta-rishis), according to the Siva Purana.
There is a recent myth associated with the union of Siva and Mohini that claims that Swami Ayyappa, a very popular deity in South India, was another off­spring of their union.