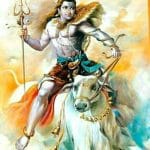 Nandi was both a divine bull and a human manifestation of Siva. One account stated that Kandikeshvara (the tawny-colored dwarf), or Adhi- kara-Nandin, had lived a good and long life that was coming to an end. He prayed to Siiva for a longer life, and Siiva not only granted his request but placed Nandi, as he came to be called, over a portion of his dwarfs (ganas). Adhikara-Nandin was Nandi in his human form with the physical appear­ance of Siiva and stands at the entrance to many South Indian temples as a Nandi is Siva’s vahana, his vehicle or mount. door guardian. There are several sepa-
(TRIP) rate accounts of his birth. One had
Adhikara-Nandin springing from the right side of Vishnu as a gift to the brahmin Salankayana, whose austerities
brought a son who looked exactly like Siva. This was said to be Adhikara-
Nandin’s forty-ninth rebirth. Another version stated that the rishi (sage) Nandi earned a boon from Siiva by his great austerities and it was his wish to become head of Siva’s ganas.
Nandi the eternal bull had a number of roles—all in relation to Lord Siva. Nandi was Siva’s vehicle (vahana), his chamberlain, the chief of his attendants (ganas, dwarves), the guardian of all the four-legged creatures. The Vayu Purana said that Nandi was the son of Kasyapa-Prajapati and Surabhi. He mar­ried Suyasha, daughter of the Maruts (who have become ganas in Saivite mythology).
The bull Nandi is prominent at all Siaiva temples, usually facing the inner shrine (garbha griha). He should be white as milk in color.
See also Siiva