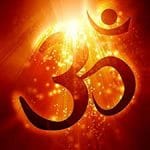 In the Vedic period Om became the holiest invocation (mantra) in Hindu mythology and religion. Om was a contraction of the vowels a and u and the anusvara m. In this one sound were encapsulated the conceptions about sound (Vac), about its effectiveness in the Vedic fire rituals, and about the vibratory nature of the universe. Om was the name given to the one sound that contained everything else (ekakshara), the one thing that was not perishable (akshara), and it was the one sound that should begin and end every ritual (pranava). By the time of the Upanishads the magical power of Om in the sacrificial rituals car­ried over into the meditations of the seers (rishis). It was said that the one who knows that Om is the imperishable or who meditates on Om could attain Brahman (the Absolute).
In the Laws of Manu (Manuva Sastra) it was said that Prajapati, the creator, had taken the milk of three cows (the three Vedas) and created the three ele­ments of Om (a, the first vowel; u, the last vowel; and the anusvara “m” as thelast consonant). The Puranas extended this image of a triad to the divine triad: Brahma (the creator), Vishnu (the preserver), and Siva (the destroyer).