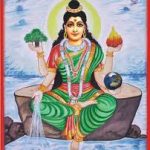 (1) Matter; (2) A goddess
Prakriti was a term meaning nature, origin, or progress, which was used to express one of the foundational ideas of India’s earliest philosophical system, Samkhya (or Sankhya). In Samkhya prakriti was the category of matter or mate­riality. Hindu mythology simplified Samkhya complexity and even personified Prakriti as a goddess (devi).
However, before prakriti was personified, the early Vedic hymns linked matter with other notions of creation or origin such as the first man, or first being (purusha) in Rig Veda 10.90, the father of beings or creatures (Prajapati), and even the large, or great, self (mahan atman). By the fifth century of the com­mon era, these associations developed into a theory of evolution in mature Samkhya thought.
Prakriti was understood as unconscious and its opposite, purusha, as con­scious. While Samkhya built the universe—that whole—from its two founda­tional constituents, other philosophical schools attacked these views as dualistic, and, therefore, incapable of getting behind these two to the One. From their point of view, the two fundamental constituents were themselves created by the One (Brahman) or the one Supreme, as Devi, Vishnu, or Siva.
See also Brahman; Devi; Prajapati; Purusha
For further reading:
Edeltraud Harzer, “Prakriti,” in Encyclopedia of Religion,
Buitenen three-part article “Studies in Samkhya,” Journal of the American Oriental Society 76 (July-September 1956): 153-157, 77 (January-March 1957): 15-25, and 77 (April-June 1957): 88-107; J. A. B. van Buitenen, “The Large Atman,” History of Religions 4 (1964); Gerald James Larson and Ram Shankar Bhattacharya, Samkhya: A Dualist Tradition in Indian Philosophy, vol. 3 of Encyclopedia of Indian Philosophies, edited by Karl H. Potter (Delhi: Motilal Banarsidass, 1970).