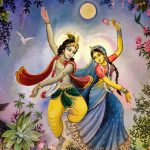 The consort of Sr Krishna Radha is one of the most popular fig­ures in Hindu mythology and is even understood by some to be a manifes­tation of the Supreme. Radha has many personas and a complex myth­ology. Radha is the young, innocent maiden coming into the forest at night in response to Krishna’s magi­cal flute. Radha is the favorite wife of Krishna (an incarnation of Vishnu) from his many wives among the cowherds of Vrindavana (Gokula).
And Radha is the wife of Adhiratha (or Kalavati) and the foster mother of Karna (the divine son of Kunti and Surya). Which of Radha’s many faces appears in a story is said to be caused by the listener to her myths—she takes the aspects of the listeners’ own Radha, gopi and favorite of Krishna (TRIP) maya and is born from their projectionstions—carnal for the carnally minded, innocent as a virgin for the pure, and so on.
Radha began to emerge toward the end of the epic period. Songs to Radha may have come from a cow-herding community in northern India, the Abhirs. And it was poetry and song, not mythology per se, that fueled her amazing rise to supreme importance in Hindu mythology. Although some poems and songs extolled her as a shy maiden, most presupposed that she was married. As her association with Krishna grew, Vaishnava theologians accounted for the fact that she belonged to another man (parakiya) in several ways: Radha was the incarnation of Lakshmi; Radha, like Krishna’s other lovers, was eternally mar­ried to him, incarnating in this lifetime to be near him.
Radha could be seen in some myths as the personification of loving devotion to the Supreme (prema bhakti). However, Radha also began to appropriate the characteristics and attributes of Lakshmi and even Durga: power (shakti), nature (prakriti), creation (maya). Radha assumed the role of Lakshmi, wife of Vishnu, as the intercessor between God (appearing as Krishna) and humanity.
In spite of all her religious importance, however, Radha’s complete surren­der to love of Krishna in every mood, rehearsed constantly for each generation in songs, plays, art, and now films, has made her stories eternal.