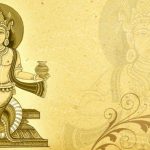 Rahu can be seen as the earliest Vedic astrological pre-science embedded in a story—the ascending and descending nodes created as the moon’s orbit inter­sects the ecliptic plane of the earth, used in predicting solar and lunar eclipses.
Mythologically, Rahu was one of the great demons (daityas) at the Churn­ing of the Milky Ocean. Rahu managed to change his shape and drink from the pot of immortality-giving nectar (amrita). The sun (Surya) and moon (Candra) discovered what he had done and informed Vishnu, who immediately cut off his head. The upper part, the ascending node, was Rahu, while the lower part of his body was Ketu, the descending node, the dragon’s tail. Rahu would forever attack the sun and moon as they came near, swallowing each of them—only to have them fall out of his severed neck. Some versions gave him a chariot with eight black horses, racing back and forth across the heavens to attack each of his old enemies.
The Puranas stated that Rahu was the son of Kasyapa (a progenitor) by his wife Simhika, therefore, a daitya. Rahu was worshipped as one of the nine plan­ets (navagraha) in temples.