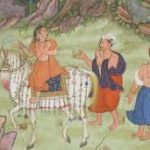 Rishyasringa received his strange name, “deer-horned,” because his mother was a doe. It happened this way: the sage Vibhandaka had been living a strict celibate life at his asrama (hermitage) deep in the forest. One day he saw the beautiful apsara (celestial damsel) named Urvasi. He lost his seed in the pond by which he was meditating, and a doe immediately drank it. She became pregnant and even­tually gave birth to Rishyasringa. He was a normal human except for a horn in his forehead—some version place a rack on his head. Rishyasringa was brought up by Vibhandaka at the asrama without any other contact with humans.
The kingdom of Anga was suffering from a drought. The royal sages told their King Lampada that only a brahmin who had not seen a woman could end the drought. His men finally found such a person—Rishyasringa. So the king sent “professional” women to bring him back to his palace. With some effort they brought him to the king, who promptly married Rishyasringa to his daugh­ter Santa. The king sent rich gifts to appease the father, but Vibhandaka ignored them and came to curse the king. However, upon arriving Vibhandaka realized that his son had married the princess, so Vibhandaka told Rishyasringa that he could remain there until he completed the rain sacrifice (yaja) and had a son. Both missions were accomplished, and Rishyasringa returned to the forest.
In Valmiki’s Ramayana, Rishyasringa was the royal sage at the court of King Lampada when the childless King Dasaratha of Ayodhya asked for help. Rishyasringa was sent to Ayodhya and did the fire ritual called Putrakameshti. From the sacrificial fire came a monster with a pot of pudding. The being gave King Dasharatha the magical potion, which the king in turn gave to his three wives. The result was the birth of Rama, Bharata, Lakshmana, and Shatrughan.