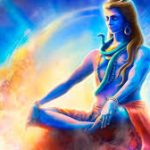 Rudra was a Vedic god (deva) long before (Siva would have been accepted as Brah­manical, or orthopraxic. However, the name Rudra was eventually appropriated for Siva, as a designation of a manifestation of Siva that was both dangerous and just within the boundaries of respectability. Even before this process was com­plete, another—that of turning a Vedic god into a class of gods—had taken place. The Rudras, however, demand their own entry.
In the hymns of the Rigveda, Rudra was the howler, the roarer, and the ter­rible. He was a storm god, either associated with the Maruts (warrior lords) or their father. His epithets were hara (the remover), ishana (master, or the ruling one), Mahadeva (the great god), and Siva (auspicious). Some of these epithets could be applied to other Vedic gods such as the Maruts, but all were appropri­ated by Siva later.
Rigvedic stories of Rudra portrayed him as a wild god, shooting arrows with­out much cause at both gods and men. Rudra only had four hymns offered to him and, forgotten by the devas as they divided the sacrificial offering, only received the leftovers. One story told of him as the fiery hunter-warrior, attacking the creator Prajapati because of his incest with his daughter Ushas, goddess of the dawn. Prajapati made him lord of the creatures (Pasupati) to appease him. A related episode—substituting Brahma for Prajapati—found Rudra collecting seed that Brahma had lost after becoming excited by apsaras (celestial damsels) who were attending a Vedic sacrifice. Brahma had offered his seed to the sacrificial fire (an identification of Rudra with Agni, the fire god) and from that offering three sages were born—Angiras, Marici, and Bhrigu.
During the next periods Rudra received several versions of his birth, or cre­ation. Most versions told that Rudra was created by Brahma out of his own anger. He was also portrayed as a son of Kasyapa and Surabhi, or Kasyapa and Aditi, or even as an androgyne that was divided into male Rudras and female Rudrani.
All of this changed in the Puranas. Since Rudra had been called Siva (auspi­cious) in the Vedas, Siva appropriated every aspect of Rudra. Rudra was the man­ifestation of Siva’s anger—at Daksha’s sacrifice or at the sacrifice in which the devas forgot to give Rudra ((Siva) a share. At Daksha’s sacrifice Siva’s anger far exceeded that of Rudra when he had been denied a share, before the myth was appropriated to Siva. Rudra plucked out eyes of the gods (as he did with Bhaga, a Vedic god) or disfigured them, but then restored things later. However, Siva as Rudra (or in some versions as two demonic figures) killed Daksha, a brahmin, or plucked off Brahma’s head. Thus, Siva committed the greatest sacrilege against dharma—killing a priest. Rudra, as Siva’s darker and angrier nature, came to be associated with this warning to orthodox priests—not to become too arrogant, for (Siva’s wrath might manifest itself as the dark hunter-killer. The Kapalikas were a sect of Saivism who carried the skull, just as Siva carried Brahma’s for his twelve years of penance, and they were warrior-ascetics, dangerous and fierce.
Rudra’s wife was Prisni (water bag), an association with his aspect as a storm god who brought fertilizing rains.
Most recently, Rudra has been worshipped as the Tantric form of Siva.