SAKUNTALA, and Dushyant Story in English – An apsara (celestial damsel) 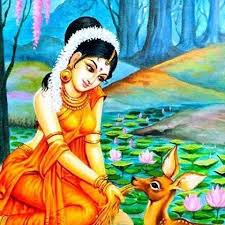 Shakuntala’s story is one of the favorite love stories of India, told in quite differ­ent ways by two great poets—Vyasa and Kalidasa (both c.400-500). (sakuntala was the daughter of a sage and an apsara, and her son became an emperor.
Shakuntala’s mother, the famous apsara Menaka, was sent by Indra to stop the threat that the sage Visiva Mitra’s austerities (tapas) posed to his rule of heaven (svarga). Menaka was successful, diverted the sage from his ascetic prac­tice, used up his energy (sakti), and became pregnant. However, as soon as she delivered, Menaka left the child beside the Malini River and went back to Indra’s heaven. The sage Kanva found the baby being tended by birds (sakuntas) and took her back to his asrama (hermitage), where he raised her. She grew into a beautiful young woman. One day when Kanva was away from the asirama King Dushyanta arrived, tired from hunting and hungry. But not too tired. He fell in love with (sakuntala and married her in the gandharva way (by their own word and action). After several days he returned to his palace with the promise that he would send for her. But he forgot. The great poets diverged in the reasons they gave for this forgetfulness. Vyasa’s solution has the least complications—the king just forgot and was reminded by a voice from heaven when mother and son arrived at his palace many years later.
Kalidasa’s version blamed this forgetfulness on a curse from the rascal sage Durvasa, whom Sakuntala failed to serve properly when he came to the asrama. However, in this version she did have the king’s signet ring, but she lost it in a river. She and her grown son Bharata were rejected by King Dushyanta, who probably had heard paternity claims before. Eventually, a fish was caught with the ring, and the ring made its way to the king, who then remembered giving it to a young girl. Dushyanta finally found (Shakuntala and Bharata, and Bharata eventually inherited his father’s throne and became the great emperor who gives his name to modern India (according to Kalidasa’s version).