SANJAYA – A sage and minister of King Dhritarashtra 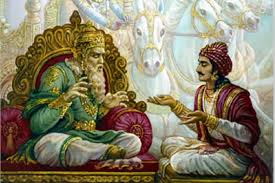 In the Bhagavad Gita Sanjaya is one of its four characters—the other being Arjuna, Krishna, and King Dhritarashtra. The idea of boon-granting (vara) had become so common by the time of the late epic literature that a sage like Vyasa

Sandstone figure of Camunda, the fierce, protective eight-armed mother, from Orissa, eastern India, ninth century. (The British Museum/Heritage-Images)can give someone, Sanjaya, the power (siddhi) of clairvoyance and clairaudience (distance sight and hearing). This power was called the divine eye (divya-drishti). Through this power, Sanjaya was able to give blind King Dhritarashtra a full account of what was happening on the plains of Kurukshetra in the great Bharata war. He even narrated the entire Bhagavad Gita, with its conversation between Krishna and Arjuna, to the king as that conversation was happening miles away.