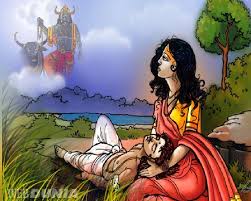 The Savitri is also called the Gayatri. It is recited each morning and evening by millions of Hindus. The Savitri is addressed to Savitri (the generator) who in the earliest Vedic lore may have been one of the attributes of the great sun god, Surya. The Savitri was also personified in the later Vedas as the goddess Savitri, wife of Brahma, and mother of the Vedas. Savitri was a princess, born to King Asvapati of Madra and his wife Malati. When Savitri reached the right age for marriage, she and the ministers of her father set out in search of the right person to marry. She found Satyavan, the son of King Dyumatsena of Salva. Savitri fell in love with him and married him. Satyavan was a gem of a person. Their life seemed perfect. Narada, the sage with all the bad news, appeared and told Savitri and her father that Satyavan would live only one more year.
Savitri was grief-stricken to hear this news. However, she continued to live with Satyavan and loved him deeply. At the end of one year, Yama, the god of death, came to take the spirit of Satyavan. Savitri begged Yama for her husband’s life. Her request was denied. Yama took Satyavan’s life. Because of the power of her fidelity, Savitri was able to follow Yama to Yamaloka (the realm of death). Yama tried to dissuade her, but she was determined to return with her husband alive or lose her own life. Yama could not take Savitri’s life, since her time had not yet arrived. Finally, Yama had to yield to Savitri’s wish and give back Satyavan’s life. Satyavan and Savitri lived for a long time thereafter.