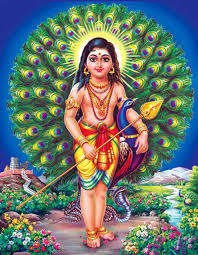 Subrahmanya means literally “favorable to priests,” often used as an invocation to the devas (gods) in Vedic soma sacrifices. Subrahmanya was also the designa­tion for one of three assistants to the Vedic Udgatri priest. However, this beau­tiful Sanskrit compound was simply appropriated in the Puranas to name Siva‘s most frightening creation, a son born to destroy a demon before he was a week old. The story of Agni’s rape of the wives of the sages was also appropriated but reconstructed in such a confusing way that they were not Subrahmanya’s moth­ers but merely his nurses.
The need for such a warrior son is accounted for in a story that began back at the beginning of this kalpa, when Vajranga’s wife had been abused by Indra and Brahma. Vajranga did the necessary austerities to gain a boon to allow his son to avenge this abuse, a son more powerful than Indra and not to be killed by anyone more than a week old. Taraka, the asura (demon), was that son, devel­oping into a conqueror of the three worlds.
The devas pleaded with Siva to solve the problem. So he and his favorite wife Parvati began making love to produce a son to take care of the problem. But their thousand-year play (lila) began to shake the foundations of the universe. The devas, including the goddess Bhimi (earth), begged them to quit. Siva stopped immediately, but then lost his seed onto the earth, overflowing forests and mountains. Bhimi complained, and the gods had Agni consume the seed with his fire. Parvati became angry and cursed Bhimi for causing her not to get a son by Siva. The curse was that Bhimi would have many forms, be a wife to many, and not enjoy the happiness of having children. (For details about other versions of this myth, see the entries on Skanda and Karttikeya.)
Siva’s semen was carried to the Ganga and then deposited on the Udaya mountain in the Shara grass. Thus, Subrahmanya was born and began crying. The six Krittikas or divine stars, formerly the six wives who had been raped by Agni, descended to the crying infant. When he saw them, Subrahmanya devel­oped six heads so that he could be breast-fed by each one of them. Siva came and crowned his enormous infant the commander-in-chief of his forces. Finally, before he was more than a week old, he led his army against the armies of Taraka-asura, Mahisha, Bana who was the son of Mahabali, and numerous other great demons. Subrahmanya killed the otherwise unkillable Taraka-asura, and other demons were killed as well.
Another story was told to give the reason that Subrahmanya took the vow of celibacy. Parvati loved her new child so much that she petted him con­stantly. So Subrahmanya became obsessed with his desire for physical pleas­ures. He became a menace to all the goddess in heaven, raping them at will. Finally, Parvati called Subrahmanya and gave an image of herself to him, telling him to see every woman as his divine mother. Thus, Subrahmanya was able to become celibate.