Home Hindu Mythology TARA – One of the five perfect women

TARA – One of the five perfect women 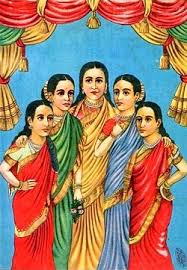 The story of Tara illustrates the Puranic mentality of defaming its heroes and heroines, since some accounts make her a willing participant in adultery and others exonerate her and present her as one of the pancakanaya, five perfect women.
Tara was married to the great sage Brihaspati and was unusually beautiful. Consequently Tara was abducted by Soma (or Candra, the moon), and that resulted in a war known as Taraka-maya. Rudra and the demons (asuras) were on one side with Soma, and Brihaspati and the gods (devas), led by Indra, were on the other. Brahma finally restored Tara to her husband. However, she was with child. Both Soma and Brihaspati claimed the child, who was named Budha (the planet Mercury). Finally, Tara said that the child was fathered by Soma.