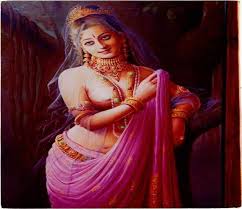 Urvashi’s story is unusual. She was an apsara, but instead of being born or created in heaven she was born from the thigh of a mortal. She resulted from a conflict between Indra and her father, the sage Narayana. It happened in this way. Narayana and Nara, sons of Dharma and grandsons of Brahma, were heating up the throne of Indra with their powerful austerities (tapas). Indra tried three ways to stop their acquisition of power: boons, fear of his show of power, and the temptation of his celestial beauties. The first two had absolutely no effect, but possibly because of spring the sages opened their eyes to see all the famous apsaras from Menaka to Ghritachi and 10,080 maidservants. To teach Indra a les­son, Narayana slapped his thigh (uru), and from it was born “the one born of a thigh” (urvasi). She was first in beauty of all the apsaras. Other beautiful women were also created, and all given to Indra. He apologized to the sages and left with his celestials as well as the new gifts. Once in Indra’s heaven, Urvashi became eleventh among the singers and dancers.
Later, either Brahma (in the Devi Bhagavata) or Mitravarunas (in the Bhagavata Purana) cursed Urvasi to be born on earth. Urvasi had heard of a hand­some king named Pururavas, found him, fell in love, and married but with three conditions. Even with all his other beauties Indra soon missed Urvashi and sent his gandharvas to bring her back. Somehow they knew that she had promised to stay with King Pururavas only if he tended her two lambs, let her eat only ghee (clarified butter, food of the gods), and did not allow her to see him nude. So the gandharvas waited until they were at play in the bedroom. They stole the lambs, and when the king jumped from the bed to save them, the gandharvas lit the sky with a bolt of lightning. King Pururavas was caught without any clothes. He raced after the lambs and soon found them. However, when he returned, Urvashi had left. Pururavas wasted away searching for his lovely Urvasi. Years later he found her at Kurukshetra, site of many a pilgrimage. Her famous words are com­mitted to memory by every Indian schoolchild in their vernacular, or better yet in Sanskrit: “Women are like wolves. Don’t have an alliance with them, O King! Kings should not put their faith in women and thieves.” (Of course, this was not quite the way the great medieval poet Kalidasa described their story in his Vikramorvasiyam, one of the great love poems and dramas of India. But that is another story.)