USHA – Daughter of Banasura and wife of Aniruddha 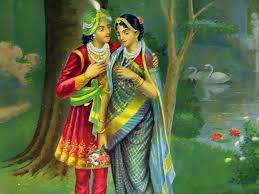 Usha was a daitya (demon) princess, daughter of Bana and granddaughter of Bali, both great asura (demon) rulers. Usha dreamed of the man she would wish to marry. Citralekha, a woman with this special siddhi (power), drew a picture of Aniruddha, grandson of Krishna, according to Usha’s dream. Then, Citralekha brought Aniruddha to the palace with her magic. When Aniruddha was brought to Usha’s room and saw his own picture, he fell in love with Usha.
Bana or his preceptor immediately sensed Aniruddha’s presence and sent the palace guards to kill him. Aniruddha was able to defeat them, but he was taken prisoner by magic and bound in serpents with the help of (Siva and Skanda, Siva‘s son and god of war.
Krishna and Aniruddha’s father, Pradyumna, rescued him, bringing both Aniruddha and his bride Usha back to their palace in Dvaraka.
This little story has great popular appeal. One even finds it alluded to or added as a scene within modern Indian films or video serials.