VISHNU – One of the three major gods of modern Hinduism 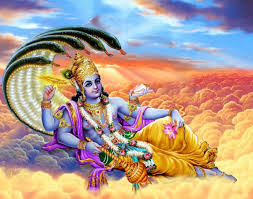 Vishnu rose from a minor role as a solar deity in the Rigveda to one of the Hindu Triad with Brahma and Siva to the Absolute of the universe in Vaishnavism. Vishnu’s willingness to incarnate in time of need to restore righteousness (dharma) was the inspiring theme that made him both absolute and a compas­sionate giver of grace (prasada).
Vishnu in the Rigveda was but a minor godling, whose solar activity of mov­ing through the three regions of the universe may well have been another’s func­tion. He was Indra’s friend and ally. When Indra slew the boar who stole the property of the asuras (demons), Vishnu carried away the dead beast, leaving the stolen property for the gods. Mentioned several times in the hymns of the Rigveda, Vishnu’s role expanded rapidly in each succeeding age. In the Brah­manas Vishnu shared in the operation of the sacrificial ritual and appropriated a role in the triad of Agni-Indra-Surya, joined by Brahma and (Siva. By the Puranic period, especially the Bhagavata Purana, Vishnu created the creator Brahma and either used (Siva or sent his own avatars (incarnations) to function both as sav­iors and destroyers. (There are additional entries on some of the ten avatars— Matsya, Kurma, Varaha, Narasimha, Vamana, Parasurama, Rama, Krishna,

Vishnu, the preserver, who incarnates in time of need to bring righteousness back to earth Buddha, and Kalkin—and some of the manifestations.) Perhaps the most unusual myth about Vishnu was his manifestation as Mohini at the Churning of the Ocean where Vishnu appears as a beautiful goddess to deceive the asuras (demons) and allow the devas (gods) to acquire soma (the drink of immortality).
During the period before each re-creation of the universe Vishnu would rest upon his serpent bed formed by Ananta (also known as Sesha) on the Milky Ocean. The abode of Vishnu was called Vaikuntha. Vishnu was always blessed with won­derful opponents—Bali, Hiranyaksha, Hiranyakasipu, Ravana, and many others. Each necessitated a manifestation of power or grace, and that was freely given.
Just as in the literature, among the pilgrimage sites (tirthas) Vishnu’s sacred geography appropriated almost all of the sites of Indra and Brahma, until no other god, not even Siva, had more sites of worship.
Iconographically, Vishnu usually has four arms (although there could be many more), a dark blue complexion, and royal headgear. In his hands are the conch, discus, mace, and lotus. Upon his chest is the miraculous jewel called the Kaustubha (treasure of the ocean) and a curl of hair known as Sri-vatsa (beloved of Sri, or fortune). His vehicle is Garuda, the sun eagle, taken from Surya. His wife (or wives) are Sri (fortune) and Lakshmi (thousands, or good fortune). Many see her as one, Sri-Lakshmi, even when two images represent her presence. There were other wives during his various incarnations, such as Bhimi (earth) and Rukmini, principal wife of Krishna.
Vishnu’s epithets demonstrate that his followers understand his many rev­elations as transcendent, as an incarnation (avatara), as an emanation (vyuha) like Vasudeva or Aniruddha, as divine immanence and inner ruler, and as an idol for worship (murti).