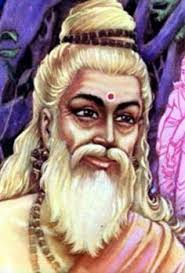 Visvamitra was already important in the Rigveda as a sage and composer of many hymns in book (mandala) three. However, his lineage shifted with the sources so much that one later authority stated that he was the son of both King Kushika and King Gadhi. Visvamitra (universal friend) was able to raise himself from kshatriya caste to brahmin by his austerities (tapas). He was still, however, made to submit to his brahmin rival Vasishtha in later mythology to show the sub­mission of kshatriyas to brahmins. This rivalry became so exaggerated in the later literature that Vishwamitra and Vasishta were depicted as hating each other so much as to murder each other’s sons and, according to one low moment in these stories, eating each other’s sons. Such a portrayal ignored their status as maha- rishis (also sapta-rishis) in this current manvantara, the seventh cycle of cre­ation, and therefore models of Vedic virtues. The later mythmakers simply were so prone to debase their subjects with sin and weakness that they lost sight of how these figures had been portrayed in earlier periods.
In an Epic account Visvamitra became the object of the apsara (celestial damsel) Menaka’s seduction. Visvamitra had begun to accomplish too much in his austerities and was a threat to Indra’s rule of heaven. So Indra sent Menaka, and she successfully diverted the sage from his tapas. They had a girl who was later named Sakuntala (one raised by the birds), after they abandoned her and Shakuntala was found and raised by the sage Kanva. The story of King Dushyanta’s discovery of the young beauty (Sakuntala and his impregnating her and abandoning her is found in her entry.
Vishwamitra’s rivalry with the chief priest of King Harishchandra of Ayodhya involved many episodes and prior causes. Vasishtha had counseled King Harishchandra to exile his son Satyavrata. However, the king repented this deed and gave over his throne to Vasishtha while he practiced austerities. The kingdom experienced a twelve-year drought during this time. Visvamitra had left his fam­ily to practice austerities, and they were starving. The young prince Satyavrata took pity on them and provided them with fresh meat from his hunt each day. One day there was no game so he killed Vashishtha’s cow. To make matters worse, the cow was Kamadhenu, the wish-granting cow given by the gods. When Vasishtha learned what had happened, he turned Satyavrata into the shape of an outcaste (candala) and cursed him with the name Trisanku (three sins). When his father King Dushyanta died, Trisanku became king, but asked to go bodily to heaven. Vasistha and Vishwamitra fought over this, but Visvamitra was able to perform this miracle even against the opposition of the devas (gods).
Visvamitra also got the better of Vasishtha in their next contest, which involved King Harishchandra, son of Trishanku. Harishchandra had no children by his one hundred wives, so upon the advice of his chief priest Vasishtha and against Vishwamitra’s warning, he became involved with the sacrificial rituals to the god Varuna. However, Varuna’s price for granting children was that the first one be sacrificed to him. After many years of postponing this human sacrifice, finally the day came. Sunahsepha, the young prince who was to be the victim, having just received the sacred thread, had been secretly trained with a magical mantra that would win over Varuna. This training had been given by Visvami­tra. Sunahsepha chanted the varuna mantra as he was tied to the slaughter-stone, and Varuna appeared, granting the boy his freedom and the king a cure from the disease that had come to him for not performing the sacrifice. Sunahsepha was given to Visvamitra, according to the logic that since his teaching had given Sunahsepha his life, Visvamitra was the prince’s father.
Visvamitra was given many other roles. He had another relationship with an apsara named Rambha. He appeared as an advisor of King Rama and his brother Lakshmana. In the Markandeya Purana Vishwamitra’s feud with Vasishtha reached the point that they each cursed the other to become birds. However, their fighting continued with such fury that Brahma changed them back into sages and forced them to reconcile their differences.