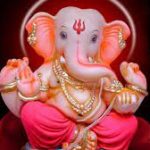 Ekadantha
Once, Parasuraman, son of Sage Jamadagni, wanted to visit his preceptor Lord Shiva. With this intention, he came to Kailas. He entered that beautiful city and went  straight into Parashar‘s palace. In the outer yard of the palace, he saw Rudraganas and Ashtabhairavas. At the main entrance of the palace, he saw Nandikeshwara on the right and Mahasimha on the left.
Parasuraman exchanged courtesies with them, took permission from Nandikeshwara and entered the palace. A t the doorway, he saw Ganesha, Karthikeya and Veerabhadra seated on golden thrones. He talked to them politely and with love. Now he was about to enter Para Shiva’s room, when Ganesha Stopped him and said, “Hey Rama, Para Shiva is Sleeping at the moment; I will go in and get S permission for you to enter. Please wait here until then.”
Parashurama said, “Dear Ganesha, I am going in to have darshan of the feet of the omniscient Lord of the three worlds. I will just touch his feet with my head, also have darshan of the mother of the world and then come out
immediately.” Ganesha did not allow him to go in. There was a war of words between the two and it resulted in a big fight. Parashurama wielded his weapon, Parashu, (axe). This Parashu was not an ordinary axe. It was a divine gift, given by Shiva himself. In the fight that ensued, the axe fell on Ganesha’s left tusk and cut it off. The tusk fell to the ground. There was commotion everywhere.
Parvathi was distraught at the incident and Lord Hari, who had to come  from Shwethadweepa to console her, said, “Devi, isn’t Parashurama also a son to you as Karthikeya and Ganesha are? Please calm down. There is a reference to Ganesha as Ekadantha in the Vedas. In the Samaveda your son is called by eight different names.

Ganeshamekadantam cha Heramba Vignanayakam,
Lambodaram Shoorpakarnam Gajavaktram Guhagrajam
Ganesha, Ekadantha, Herambha, Vighnanayaka, Ambodara, Shoorpakarna, Gajavaktra and Guhaagraja are the eight
names If one chants them and prays to the Lord, all the hurdles will be removed and everything auspicious will take place.
Ganesha-Thulasi
During the Brahmakalpa, once, Thulasi Devi was chanting the name of Narayana while on a pilgrimage. In the course of her journey she came to holy Ganga whose very touch relieves one of all the sins. She saw the
Nidhipathi (Lord of Wealth), Ganesha, there. He was immersed in_ chanting the Krishna mantra. He appeared very handsome clad in yellow silk cloth. His whole body was smeared with holy sandal paste and he was adorned with exquisite jeweler. Seeing such a person who had conquered his senses and overcome his desires, Tulasi, who was
attracted to him, said in fun, “O Gajavaktra, Shoorpakarna, Ekadantha, Ghalodara, all wonders seem to have found a home in your person. What is the secret? What kind of tapas did you do to get such a fruit?? Ganesha did
not like Thulasi’ s words, but he spoke politely and said, “Child, who are you? Whose daughter are you? Why have you come here? Dear child, you should not come in the way of m y tapasya. It is a sin to do so. That will cause
a lot of trouble for you. May the omniscient lord bless you!”
In reply Thulasi said, “I am Thulasi, daughter of king Dharmatma. I am doing tapasya with the intention of getting a
husband. After seeing you, I have decided to marry you. Please accept me as your wife.”
Ganesha pretended to be frightened and said, “O my God! Marriage is a big burden of troubles and sorrow. There is no happiness in it. It is a destroyer of philosophy and a Springwell of doubts. You forget about me and find some other young man. Kindly pardon me.”
Thulasi got angry when she heard words condemning the holy institution of marriage. She cursed Ganesha saying “You are definitely going to get married.” Ganesha also cursed her saying, “May a Demon become your husband.
Later, you are going to turn into a plant as a result of another curse by a great man.” Thulasi was very sad. When Ganesha looked at her face, he felt sad and concerned for her. He said, “Devi, do not feel sad. Compose yourself. You are the essence of all flowers. You are going to become very dear to Lord Narayana. All the Gods feel happy when they are offered Thulasi, but you are going to become special favorite to Lord Sri Hari.  But as far as I am concerned, your presence 1s prohibited.” So saying Ganesha left? for Badarikashrama for doing tapasya. Even  today we should not use Thulasi in Ganesha Pooja.
Greatest among the wise
Once the Devas came to Kailas to have darshan of Shiva and Parvathi. They felt blessed. They congratulated Parvathi for getting such wonderful sons as Ganesha and Karthikeya. They gave Shiva and Parvathi a divine modaka which was filled with nectar. They told Shiva and Parvathi about its greatness and offered pradakshina namaskar
to the divine couple. Then they left for their abode, the swargaloka.
When Ganesha and Shanmukha saw the sweat meat in their mother” s hand, they pestered her in order to get it. Parvathi said, “First of all, listen to the greatness of this sweetmeat. If you just smell it, you will become immortal. If one smells it and then eats it, he will get the ability to understand the nuances of all Vedas and shastras. He will
become an adept in all skills-he will become a great writer, painter, scholar and an expert in all sciences. In a nutshell, he will become omniscient.” Parvathi Devi looked at Shiva and continued, “Between you, the one who
establishes his superiority by practicing dharma, will get this modaka. Also we both have decided to perform that person’ s marriage. One who goes round the world, visits all holy places of pilgrimage strictly according to shastras, will be entitled to this gift.” ‘
_ Karthikeya lost no time. Even as his mother completed her words, he got on to his vehicle, the peacock, and in a moment he was seen flying in the sky. Gajanan sat there thinking what he should do. He closed his eyes and meditated. In a few minutes he came out of his meditation, smiling. He had a bath, put on clean and bright clothes He placed two seats. Then he went to his parents, Gowri and . Shankar, prostrated before them and said. “O
most sacred ones, come and be seated and bless me.” With a smile, they obeyed Ganesha.
Ganesha worshipped them with great devotion and prostrated before them. Then, with all concentration and pleasure, he started going round his parents. When he completed one round, he prostrated before them; he did
this seven times. Then he stood before them with folded hands and said, Please give me the modaka and perform m y marriage at the earliest.” Parameswara looked at Ganesha and said,” Gajanan, your brother has gone on a pilgrimage around the world. You also go, complete the pilgrimage and come back quickly.”
Gajanan once again folded his hands and  said, “Revered father, I have not only gone round the world seven times but also visited the pilgrimage centers as many times.”
Parvathi and Parameswara expressed their surprise like ordinary mortals and said, “Dear child, when did you go round the world seven times?”
; Ganesha said, “I prostrate before my father, who is the dispenser of dharma, and my mother, who is the incarnation of dharma. I went round you seven times. In this way I have been round the seven `times.
Dharma shastras always tell us the truth, don’t they? They never tell us anything wrong.

The Devas begged  Ganesha to relent further. Then Ganesha said, “Anyone who looks at Chandra knowingly or unknowing on the fourth day of the brighter half of the month of Bhadrapada will be put to trouble. But those who perform a vrata on the fourth day of the darker half of every month, should certainly see you on that day. if they do not see Chandra on that day, their vrata will remain incomplete and they would not get the desired fruit.”

Writer of the Mahabharata

Brahmarshi Vedavyasa, son of sage Parashar who composed the Mahabharata, which is considered to be the fifth Veda, was wondering how to teach the holy epic to this disciples and make it popular among the people of the world. When Brahmadeva came to know about it, he came to the former’s ashram in order to console him and for the good of the world. Vyasa, who was pleasantly surprised to see the originator of the Veda, Lord Brahma, in his ashram, stood up. he prostrated before the lord, offered him a holy seat and paid his respects to the great guru by offering him aroha, padya and other things. then with hands folded, he stood before him. vyasa was supremely happy at the darshan of the lord. on being instructed by the lord, vyasa sat on a seat and said with great humility. “Bhagavan, i have composed an epic which would be sacred in all the three worlds. i have tried to put in the essence of the Vedas and other holy books on shastras.. Not just that, one can find the epitomized form of vendanges and Upanishads in it it also contains everything useful to human life long with detailed descriptions and explanations. but i have a problem. i have it in my mind and i am looking for a scribe who can write it down as i recite it. so far i have not found one.”

Bhagavan Brahmadeva praised the work composed by Vedavyasa and said, “O great Sage, think of lord Ganesha for writing it down.” so saying Brahmadeva vanished.

then the sage prayed to Ganesha in his heart. no sooner did the sage do so, than Ganesha appeared before the sage . the sage welcomed Ganesha with all love, and respect and devotion. Ganesha then sat on a holy seat and Vedavyasa spoke with great reverence: “Gananayakaa, I would like you to become the scribe of the great epic, the Mahabharata. I have composed the epic completely in my mind. while i narrate it, you have to go on writing it down. ”

on hearing the sage, Ganesh said, “O holy sage, you have to go on dictating in such a way that my pen should not stop. Only on that condition i shall agree to become the scribe.” Vedavyasa said, “So be it, but when you write, you should understand everything in it. Nothing should be written without understanding.”

Ganesha, who was wisdom incarnate, agreed to do so and the work began. Asa result of Ganesa’s blessings, the world has got an invaluable gift, the great epic, Mahabharata