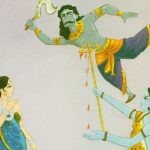 In one version of his birth Andhaka was a daitya (demon), born of Diti and KasSyapa. He had a thousand arms, a thousand heads, and thus two thousand eyes, hands, and feet (in another version, two thousand arms, two thousand legs). And even though he could see, it was said that he walked like a blind man. Andhaka means “blind” or “blind one.”
In another version Andhaka was born from the love play (lila) of Parvati with her husband, Lord Siva. Parvati placed her hands over Siva‘s eyes in jest, only to throw the universe into total darkness. But her touch heated Siva so that a drop of sweat fell from his brow and became an angry, deformed, dark, hairy demon, Andhaka. Parvati and her attendants were told by Siva to protect “her son” and care for him.
On earth the demon Hiranyanetra (the golden eye) was practicing severe austerities (tapas) to win a boon from Siva. And eventually the lord of yoga (Siva) was pleased and granted Hiranyanetra’s wish for a heroic son. Siva gave his own son, Andhaka, to the demon yogi.
In the Kurma Purana, Andhaka desired the beautiful goddess, Parvati, and went to Mount Mandara to abduct her. Siva had gone to the Pine Forest to man­ifest himself there to its sages. He had left the gods, Vishnu and the rest, to attend to and protect Parvati. The attendant gods became women in order to serve the empress of the universe. But when Andhaka (who in this myth may not be seen as being already Parvati’s son) attempted to molest her, SSiva appeared and impaled him on his trident and began to dance. But by the mere touch of SSiva, Andhaka’s sins were burned away. SSiva transformed this grotesque demon into a handsome young man. And when Andhaka prostrated before Parvati and Siva, he was accepted as their son.