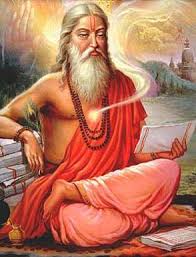 Angiras appeared in many roles, some contradictory. The Rigveda called him the first of the fire-gods. As such he was a mediator between gods and men. At times he appeared as a maharishi, a composer of many Rigvedic hymns to the gods. He was also a prajapati, or progenitor of humankind. As such his origin or lineage was important, at least for later mythology. He was said to be born from the mind of Brahma, as were five other sages: Marici, Atri, Pulastya, Pulaha, and Kratu.
There was a quite different version of his birth. Once Brahma went to see a sacrifice performed by Rudra. He was attracted by the celestial damsels present there and had a seminal release. He offered the semen to the sacrificial fire, and from that fire were born three sages: Angiras, Marici, and Bhrigu. The meaning of Angiras is “one born from the fire.”
When Angiras was considered one of the sixteen grandfathers (prajapatis), it was by the appointment of Brahma. Angiras had two wives, Smriti and Khyati, and fifteen children, in one account, and four wives in another: Smriti (memory), Sraddha (faith), Svadha (oblation), and Sati (truth). The famous sage Brihaspati was his son.
Late myths tell of the great austerities (tapas) of Angiras that so frightened Indra. Indra’s throne became overheated by these tapas, increasing his anxiety. Indra had to act to stop these austerities, which could result in Angiras usurping his rule of heaven. One version had Indra being reborn on earth as the son of Angiras, by the name of Savya, to frustrate Angiras austerities.