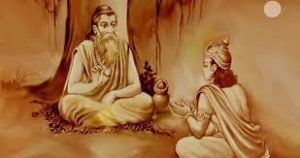 Sage Uddalaka daughter Sujata married his disciple Khagodara, and to them was born Ashtavakra. The word ashtha-avakra means “one with eight bends,” referring to his deformed body.
There are two versions of how he acquired the eight bends. According to one version, once Khatodara was reciting holy mantras. Sujata sat beside him, but the baby inside her womb heard his father’s chants and said loudly that Khago- dara was chanting the mantras in the wrong way. Khatodara became very angry and cursed him to be born with a crooked body.
Another Puranic version stated that Devala was Ashtavakra original name, and that he was the son of the sage Asita. In this version Devala was cursed by Rambha, one of the celestial nymphs (apsaras). She had fallen in love with Devala, but when Devala did not yield to her wishes, she cursed him with a crooked body. He thereafter was called Ashtavakra. He later regained his orig­inal form by doing tapas (austerities).
The Agni Purana added that once Ashtavakra laid a curse on the celestial nymphs (apsaras) when they teased him about his crooked body, dooming them to be reborn on earth as humans, and thus the celestial nymphs were reborn as the many wives of Shri Krishna.