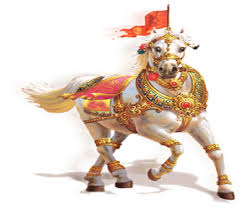 A wild stallion was released by a warrior king to roam freely. The king or his general would follow the horse with an army and defeat in a battle any kingdom that the horse crossed that would not pay tribute and recognize the king’s sov­ereignty. There was a chance for great honor, but only a “world conqueror” (cakravartin) could complete such random warfare. At the end of the year the horse would be brought back to the king’s capital, where priests would sacrifice it in one of the most elaborate and expensive of Vedic rituals. The cost of the asva-medha alone required much booty from the year of conquests. The ritual had a number of features involving fertility and renewal.
Performing a hundred such sacrifices (yagas) was the definition of an Indra. Thus, later mythology taught the descent of royalty from the gods and their upward rise back to divinity, even the status of king of the gods, an Indra.