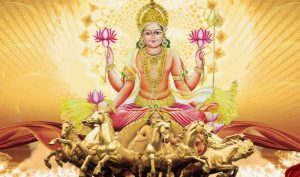 Bhaga (inherited share) was a Vedic deity of wealth, power, and happiness. He was also, according to the Rigveda, one of the seven adityas. The other six are Mitra (friendship, comradeship), Aryaman (honor, or chivalry), Varuna (binder to tribal rules; “all-seeing”), Daksha (ritual skill, or rules of ritual), and Amsa (gods’ share).
Later, in the Mahabharata and the Puranas, there are twelve adityas, born to grandfather Kasyapa-prajapati and his wife Aditi. Bhaga was given a wife, Siddhi (psychic power). He made brief appearances: in Indra’s assembly, at Arjuna’s birthday celebration, at the burning of the Khandava forest, at Daksha’s sacrifice, and at the sacrifice in which the devas forgot to give Rudra a share. In each of the last two stories, Bhaga’s eyes were plucked out. At Daksha’s sacrifice Bhaga was one of the presiding priests. After Siva‘s anger over Sati’s suicide in her father’s sacrificial fire was manifested as Veerabhadra and Bhadrakali, Virabhadra plucked out Bhaga’s eyes. Another version had SHiva doing it himself. This blind­ness was later seen as appropriate to Bhaga’s way of bestowing wealth—without regard to purity, devotion, or honor. Bhaga bestowed wealth blindly.
In one account that did not become universal, Bhaga was associated with Rudra (a fierce god appropriated by the Siva myth cycle) and gave his name to eleven Rudras. This association with Rudra came from a role Bhaga played in the myth that told of the dividing up of the sacrifice among the devas at the end of the deva yuga. Rudra was left out and in a rage attacked the gods, causing great injury. Bhaga was blinded. Another version had Rudra giving back Bhaga’s eyes as well as the body parts taken from other gods. Some accounts would have Siva returning these items.
But the point about wealth being given blindly was lost in the episode of dividing up the sacrifice, while it remained intact in the myth about Virab- hadra’s blinding Bhaga at Diksha’s sacrifice.