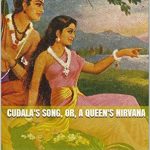 Queen Cudala‘s accomplishment was placed long ago in the first Dvaparayuga of the seventh manvantara (world cycle). Perhaps that placement in an age of greater spiritual potential was why ksatriyas were able to achieve great powers (siddhis) without mention of a brahmin teacher and a woman could learn faster than her husband. It seemed also to be a time when humans did not wish to yield to the temptation of calling for help from a god. An alternative interpretation is that we are dealing with an anti-priestly myth with a revolutionary notion that spiritual practice rather than high-caste birth was the more important factor.
Acccording to the Jnanavasishtham King Sikhidhvaja and Queen Cudala of Malava practiced jnana-yoga (the discipline of knowledge) together. (This myth and its scriptural source are proof of a time when jnana-yoga was more than just mystical practice.) Cudala began to gain powers (siddhis), including levitation and travel through the air. The king decided that he would not be able to achieve such powers living in the palace, even though his wife had. So he retired into the forest and performed austerities (tapas) there. Cudala finally went to him in dis­guise and stood before him without touching the ground. (cnaturally assumed that a being whose feet did not touch the ground must be a deva, so he began to reverence this being. Cudala assumed her true form and convinced (sikhidhvaja to return to the palace and practice jnana-yoga there. However, before they left the forest, Cudala used her great power to create a seductress named Urvas’i as well as gods like Indra to test her husband’s resolve. Then she took him back to the palace, where they both advanced in jnana-yoga.