GANDIVA – The bow of Arjuna 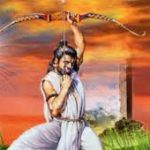 The distance between gods and heroes in Puranic mythology was not very great. Divine weapons, like the Gandiva, the great bow of Brahma, could be given to mere mortals, since the mortals were so often partial divine incarnations or from mixed marriages between gods and mortal women. Such was the case with Arjuna who did not have a human father, as he was born of Indra (god of war) and Kunti.
The Gandiva was made by Brahma. He kept the Gandiva for 1,000 years and then passed it on to Prajapati (a “grandfather”) who kept it for another 1,000 years. From Prajapati the Gandiva went to Indra who used it for 3,585 years. Indra gave it to Candra (the moon), who had kept it for another 500 years and then gave it to Varuna, who used it for 100 years. Varuna gave the Gandiva to Arjuna. Arjuna used it for 65 years.
The Gandiva was famous for having the power to punish evil and wicked people. It made its user capable of fighting against one lakh (100,000) of warriors at a time. The Gandiva was also an object of worship for devas (gods), asuras (demons), and humans.
When the Kurukshetra war ended, the Yadava dynasty declined rapidly, and even Krishna was killed. The Pandavas lost interest in ruling their kingdom. Parikshit, grandson of Arjuna, was appointed king. The Pandavas started their journey (mahaprasthana) of renunciation toward heaven. On the way, Arjuna gave back the Gandiva to Varuna by throwing it, along with the quiver of divine arrows, into the sea, Varuna’s abode.