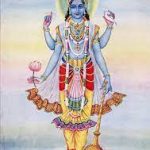 Coming from the same root as the epithet Hara for (Siva (hri, to remove), Hari also means “the remover.” There are many minor figures with this name, as well as a number of groups (some of the demon king Ravana‘s attendants, a group of devas, and others). Eventually, however, it became an epithet synony­mous with Vishnu, the remover of the sorrows of the world. Hari has been heard around the world in its vocative form, Hare, chanted by Hare Krishnas as the opening word of the great Hare Krishna mantra of salvation.
See also Hara; Siiva; Vishnu
(2) A son of Dharma-deva, the god Dharma
Hari (the remover) was a son of the god Dharma (righteousness). The other three sons were Krishna (the dark one), Nara (man), and Narayana (moving on the waters). All these figures had characteristics and myths associated with love and devotion (bhakti) directed to a personal god.
See also Dharma; Krishna; Nara; Narayana