HARISCANDRA – A king of Ayodhya 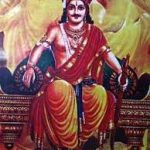 King Hariscandra of Ayodhya was very famous for his commitment to truth and for keeping his promises. Victim of a great magician’s magical powers, Hariscandra represents all righteous persons who have suffered wrongly. Hariscandra lost his kingdom, his wife, and his only son, for the sake of keeping his word. For fur­ther details about the magician’s wrath, see the entry on Visivamitra. There was also another story about his father, Trisianku (three sins), who could not get into heaven but had a heaven made for himself between heaven and earth.
Finally, Hariscandra was blessed by the Trimurtis (the divine triad), was granted prosperity, and got back everything that he had lost.