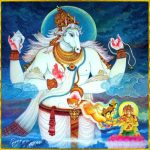 In the Pancavimsa Brahmana the story is told that four devas began a sacrifice (yajna) with the agreement that the offering (havirbhaga) would be shared equally. They were Agni, Indra, Vayu, and Yajna. But Yajna stole the offering and drove the others away with a divine bow given by Devi. So the devas created ter­mites (cital), and they ate through the bowstring. It straightened with such force that it severed Yajna’s head from his body. The devas took pity on his plight and put a horse’s head on Yajna’s body.
See also Agni; Devi; Indra; Vayu; Yajna
(2) A demon (asura) and an incarnation of Vishnu
This Puranic myth told of two Hayagrivas—one a demon and the other Vishnu, or rather his incarnation. The first phase of the story set the scene for the lord’s rescue of the world from the demon’s evil.
Hayagriva the asura was the son of Kasiyapa-prajapati by his wife Danu. He practiced austerities (tapas) for a thousand years and got the attention of Devi. She appeared and offered him a boon. He asked to become both invincible and immortal. She knew that even Brahma would only give these qualities as provi­sional boons, so Hayagriva had to settle for the boon of only being killed by another Hayagriva (one with the neck of a horse). Since there were no others in the entire universe, he went on a rampage. He even fought Lord Vishnu until even Vishnu needed a rest. However, Vishnu slept as a warrior should, sitting up with one end of his bow in the ground and the other end under his chin.
Unfortunately, there had been a curse that would make this sleep result in Vishnu losing his head. Long ago, Vishnu had laughed in Lakshmi’s presence, and she cursed him, thinking that he no longer thought her beautiful. She said that his head would be severed from his body. That was about to happen. Haya- griva tormented the gods until they had to awaken Vishnu. So Brahma created termites (cital) and bribed them with a promise that they could have the left­overs (havis) of the sacrifices (yajnas) if they gnawed through the bowstring so that its release would awaken Vishnu. They did, but the bow cut off his head. Some accounts stated that he found a new head for himself, others that the gods did—but the result was the same. The head was from a horse, and Vishnu became a Hayagriva (one with the neck of a horse). As in other incarnations, Vishnu was able to end the evil that had come into the world and restore its har­mony. There were many versions of this story, but they all gave Vishnu the neck of a horse and victory over Hayagriva, the asura.
See also Devi; Kasyapa; Magic, Blessings, Cursings; Maya; Vishnu
(3) An asura
During the time of the Vaivashvata Manu (also known as the Satyavrata Manu), while Brahma was reciting the Vedas, Hayagriva stole them. Matsya, an incarna­tion of Vishnu, recovered the Vedas, which had fallen into the ocean from the mouth of Brahma when he fell asleep at the beginning of one of his nights—the end of a Yuga and the beginning of a Pralaya (period of dissolution and cosmic flood).
See also Brahma; Matsya