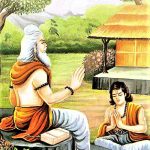 The story of Kakshivan is quite fragmentary, with some pieces quite ancient mixed with pieces from later mythology.
Kakshivan was born according to a custom by which a priest would be requested to give the king a child by his childless queen. King Kalinga was with­out an heir. He consulted the sage Dirghatamas and requested that he give him a son by his queen. But the queen did not want to sleep with the old, and prob­ably smelly, sage. So she sent her maid Ushi instead. Kakshivan was born of their union. This version was told in the Rigveda.
There was another version of the birth of Kakshivan in the Mahabharata. This time Kakshivan was born to a sage named Gautama (but not the Gautama who was married to Ahalya) and a sudra woman who lived in the land of Usinara.
The Assvin twins once gave Kakshivan a hundred pots of liquor to test his strength, according to a verse in the Rigveda.
According to the Mahabharata, Kakshivan was one of the seven Barhishads, who were created by Brahma to teach Indra. Kakshivan had completed his part of the training and was returning home. When night came, he slept by the road­side. The next morning he was found by King Bhavayavya who, upon question­ing him, found him so worthy that he gave Kakshivan his ten daughters in marriage and loaded him down with gold, horses, cattle, and chariots. Kakshivan arrived back at his father’s home and wrote many hymns of praise. Kakshivan had two daughters, Kakshivatasuta and Bhadra.