KANDU – A sage of Puranic fame 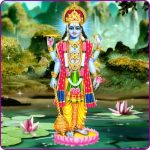 Kandu appeared in the Vishnu Purana as the archetype of sages who lose their focus. He was called chief of the devajnas (ones who know the divine). His pow­erful austerities (tapas) caused Indra to worry that Kandu would become more powerful than himself, the king of the gods. So Indra sent one of heaven’s temptresses, the apsara (celestial damsel) Pramloca, to distract Kandu from his practice (sadhana). He moved with her from the banks of the Gomati River to the Mandara valley and lived with her for a century enjoying conjugal bliss. After that century, and the next and the next, Pramloca asked if she could take leave, but Kandu insisted that she stay and enjoyed her more each day. One evening he noticed that the sun was setting and he prepared to do his normal Brahmanical duty (sandhyavandana) with a prayer (ariti) to the setting sun. Pramloca asked why tonight, since he had never done it before while they were together. Kandu protested, saying that he never missed doing any of his practices—and, besides, they had only met that morning.
When Pramloca finally convinced him that they had been together for many years, Kandu was shocked to learn the exact amount of time—nine hundred years, six months, and three days. Kandu became very angry and shouted at his former lover. Then he sent her away forever, so that he could try to start acquir­ing merit (punya) and power (siddhis) anew. As she left, flying up through the trees, her perspiration was left on the leaves of the trees of the forest, and the wind (Vayu) gathered the droplets together into a woman. Marisha, “nursed by the trees,” was given the name Varkshi and later married ten husbands (the Pra- cetases), according to a Mahabharata account. And in a Bhagavata Purana ver­sion Varkshi became the mother of Daksha (ritual skill), father-in-law of (Siva.
Kandu must have lost all his powers. He got only minor roles in stories after that. Losing his sixteen-year-old son in a forest, Kandu cursed the forest to become a desert, a desert that was later found by Hanuman. And he was just one of the many sages invited by Rama to his court when Rama began his divine rule of Ayodhya.