KUBERA – A dark spirit who became the wealthiest god (deva) 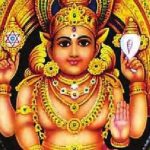 Kubera has been interpreted to be a deva and, as such, the god of wealth. There were several versions of his parentage. In the Atharvaveda Kubera was chief of the spirits of darkness and son of Vaishravana. In the Mahabharata Kubera was son of the grandfather (prajapati) Pulastya, by his wife David, and brother of Visiravas. However, in the Puranas his lineage, born of Visiravas by Ilibila, became fixed and he was king of the Yakshas (the “marvelous” or “mysterious” ones)—and thus an asura (demon). His half brother was Ravana, demon of Ramayana fame. Yet Kubera is accepted among the gods and even prayed to at the end of all ritual sacrifices.
Kubera married Bhadra (auspicious) and their daughter was Minakshi (fish­eyed). As myths were conflated, Kubera acquired both celestial and terrestrial domains. He was the lord of riches, especially those within the earth, which he could move by his will from one place to another. He often brought gems andprecious metals near the surface during the rule of righteous kings and hid them during times of wickedness. He was also regent of the north (a world protector, Lokapala). Kubera received his mace from the fragments of the sun that the celestial architect, Visivakarman, trimmed from the sun to reduce his brilliance, in order to help the sun’s wife live with him. His celestial city was well known for its wealth, located north of Himalaya. He ruled the island kingdom of Lanka before his half-brother Ravana drove him away, even stealing Kubera’s aerial vehicle, called the Pushpakavimana. Even though Kubera is preserved as god of wealth by the continuing use of a prayer to him in Brahmani cal ritual, Ganesia overshadows him in the hearts of the majority of Hindus.