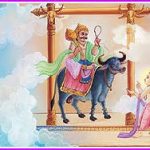 Naciketas was born to the sage Vajasiravas (also known as Aruni). Naciketas’s dialogue with Yama (death) was made famous in the Katha Upanishad.
Vajasravas believed that he would gain heaven (svarga) by giving cattle as charity (or perhaps to the gods in sacrifice). The young Naciketas noticed that the cows were old and barren, so he doubted the efficacy of his father’s offerings. Naciketas knew that his father had promised to give away everything, so he asked if his father would also give him away, and to whom. Vajasiravas ignored his son, but his repeated question brought out an angry remark: that Naciketas would be given to Yama, the god of death. Naciketas took his father’s words seri­ously and went to Yamaloka to see Yama.
When Naciketas reached the palace of Yama, the god was not there. Nacike- tas had to wait there for three days and nights without any food or drink. On the fourth day Yama came and was surprised to see the young Naciketas waiting for him. Yama, in one version, had offended a brahmin by not giving him proper hospitality, so Yama offered Naciketas three boons (perhaps for each of the days he waited without food or drink). In another version it was Naciketas’s own words and understanding that pleased Death and earned the boons.
Naciketas used the three boons wisely. He asked that his father should not be angry when he returned and would recognize him, that Yama would teach him the art of Agnividya (“knowledge of fire”—but this could mean far more than sacrificial rituals, it could have meant the secret of “inner fire”), and that Yama would tell him what was eternal after death. Yama tried to persuade Naciketas to accept only the first two boons granted. But when this failed, Yama promised riches or whatever the boy wanted—but Yama would not grant the third boon. Naciketas, however, was persistent and replied that Yama could keep the riches; all he wanted was to learn about the eternal. Yama finally agreed to tell Naciketas about that which is eternal—even after the death of the physi­cal body.
Naciketas returned home a great sage.