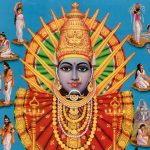 Renuka’s story has many troubling elements. She was a princess (and thus a ksatriya) married to the brahmin Jamdagni. She gave birth to an avatara (incar­nation) of Vishnu, Parasu-Rama, whom her husband commanded to kill her. She was brought back to life. In one version she was raped by King Kartaviryarjuna, who stole her divine cow Sushila and then had her husband killed. Then she sent her son, the youngest with the ax (Parasu-Rama), on twenty-one military expe­ditions to slaughter as many ks’atriyas as possible. Renuka jumped into the funeral pyre (sati) of her husband and died.