RUKMINI, Krishna Rukmini Story in English – The most important wife of SrT Krishna 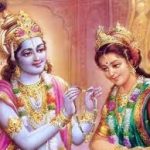 Rukmini was the wife of the more mortal version of Krishna. She and Krishna were in love, but her brother Rukmi opposed the marriage. He hated Krishna and arranged a marriage of his sister to King Sisupala. All the kings of the region came to the wedding celebration, including Krishna, who had been told through a messenger by Rukmani that she loved him and wanted him to come and take her away. Krishna secretly left his army some distance from the city, came to the wedding alone, and promptly stole Rukmini. (sisupala, Rukmi, and their allies gave chase, but were surprised and defeated by Krishna’s army. This version ignores the popular stories of Krishna’s favorite as Radha and of his dalliance with the cowherds, the Gopis. Rukmini was his favorite of five wives, and all joined him in his funeral pyre at his death.
Rukmini’s connection with Devi (as Lakshmi) was added in the Puranas. Devi incarnated first as the daughter of Bhrigu, then at the churning of the Milky Ocean, again when Vishnu was Aditya she was Lakshmi of the lotus, when Vishnu was Parashurama (Rama with the ax) she was Bhumi, when he was Rama she was Sita, and finally when Vishnu was Krishna she was Rukmini. This Puranic version then had to be reconciled with the story of Radha.