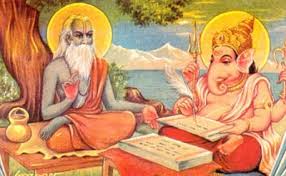 Vyasa is more properly referred to as Veda Vyasa since the name was a common one, meaning “arranger,” or editor. Veda Vyasa was said to have edited the four Vedas and authored the Puranas and the Mahabharata. Accomplishing all that would require a human who lived several thousand years, so scholars do place the story of his achievements as those of one man in the area of mythology.
Vyasa was born to the brahmin ascetic Parasara and Matsyagandhi, the fisher-woman. (See main entry under Satyavati.) Parasara married Matsyagandhi gandharva style in a fog while crossing the Yamuna River and left her immedi­ately. Vyasa was born on an island (dvipa) and dark of complexion (krishna), so that he was also known by Krishna Dwaipayana. Although he was an ascetic like his father, he was asked to father sons by his dead stepmother’s wives, resulting in the famous kings Dhritarashtra and Pandu.
Vyasa had another son who never entered a womb. Narada had found him somewhat depressed and thought that the cause was Vyasa’s desire for a son. So Vyasa began a severe penance near Mount Mahameru. But Indra was threatened and sent Ghritachi, the apsara (celestial damsel), to stop him. She changed into a beautiful parrot who had five colors. Vyasa became infatuated with the parrot (suka) and discharged his seed on some of the firewood. As the wood was placed in the fire, a divine son was created. Vyasa named him SSuka after the parrot. SSuka grew into a householder sage and helped Vyasa put together a great educa­tional institution at his asrama (hermitage). However, when (Suka left and attained divinity, Vyasa became quite unstable, wandering about calling out his son’s name (“parrot, parrot”). (Suka appeared as a vision and consoled his father. Later the sage lost all his disciples. In his next birth Vyasa was reborn as Apan- taratamas, continuing his rebirths and proving that even a sage like Veda Vyasa needed more than his great works to win release (moksha).