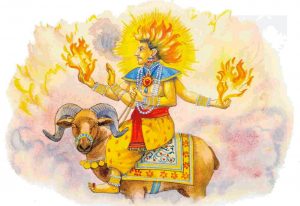 Agni next told Vashishtha the history of creation.

Vishnu is the Lord of creation, preservation and destruction. Before creation, it was only the Brahman that was everywhere. There was no day, night or sky.

First Vishnu created the waters. And in the waters he sowed the seeds of brahmanda, the great egg. From this seed there developed a golden egg which began to float on the waters. From the egg  Brahma created himself.  Since he created  himself  (svayam  sambhuta),  Brahma is  also known as Svayambhu. Having created himself, Brahma stayed inside the egg for an entire year. And at the end of the year, he split the egg into two. One part of the egg formed the heaven, the other the earth. And in between the two parts of the egg, Brahma created the sky.

Brahma next established the earth on the waters and made the ten directions. He created time, lightning, thunder, clouds, rainbows, words and anger. To ensure that yajnas could be performed, texts of the Rig Veda, the Yajur Veda and the Sama Veda emerged from his body. Holy people use the Vedas to perform Ceremonies meant for the gods.

From the powers of his mind, Brahma created seven sons. Their names were Mariachi, Atri, Angira, Pulastya, Pulaha Kratu and Vashishtha.

Prithu is recognised as the first king Prithu was descended from Dhruva. And Prithu’s father Vena was also a king. But Vena was an evil king; he was simply not interested in protecting his subjects. The sages therefore killed Vena with a straw and after Vena had died, they began to knead the dead body’s right hand and it was thus that Prithu emerged. He wore armour and carried bow and arrows when he was born. He ruled well, as per the dictates of dharma. He looked upon all his subjects as his own sons. From Prithu the earth came to be known as Prithvi.