Skip to content
Home Hindu Mythology AMBARISHA, King of Ayodhya, – A king of the Ikshvaku dynasty

AMBARISHA, King of Ayodhya, – A king of the Ikshvaku dynasty 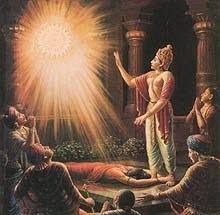 Ambarisha, king of Ayodhya (birthplace of Rama), was one of the sixteen great kings who ruled Bharata (Marutta, Suhotra, Paurava, Sibi, Rama, Bhagiratha, Dilipa, Mandhata, Yayati, Ambarisha, Sasabindu, Gaya, Rantideva, Bharata, Prithu, and Parasu-Rama).
In the Valmiki Ramayana there was a story about the theft of one of Ambarisha sacrificial cows by Indra. (In the Bhagavata Purana the theft was from King Harishchandra.) Ambarisha was forced to find a proper sacrifice to com­plete his rituals. So he bought the second of three sons, named SUnnah Sepha, of a greedy brahmin named Ricika (also know as Agartha). King Ambarisha traded 100,000 ordinary cows for the sacrificial substitute—the young brahmin SSunahsSepha. But SUnnah Sepha prayed to Indra, and Indra not only blessed him with long life but also bestowed upon King Ambarisha the rewards of the sacri­fice (yajha) as if it had been properly completed.