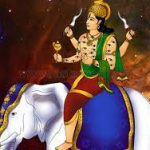 Indra’s mythology underwent more change than that of perhaps any other god in the Hindu pantheon. Indra appeared in the oldest hymns of the Rigveda as the god par excellence of the warriors (ksatriyas). This stratum of hymns was so ancient that Indra and Varuna were referred to as asuras, the older word for the “shining” gods. He was older than the adityas but was later added as the fourth aditya. He battled an ancient monster called Vritra, who later became a serpent whose body encircled the celestial waters and, once defeated, released the rains. He even fought with Dadhyanc, an Atharvan priest, and the Asvins to preserve the secret of soma. He used the bones of Dadhyanc’s horse head to slay demons that were overrunning the earth. He pursued the magical cow of Tvashthri to the moon and freed the cows penned up in a cave. The fragments that allude to these exploits in the Vedic hymns do not allow for a reconstruction of the full story. Clearly, though, Indra rose to replace Vayu (wind) in the first triad and was even prayed to as the most important of the gods in a number of the hymns. He brought the soma plant from heaven, taking it from the asuras (demons). He killed enemies, both asuras and non-Aryans. He destroyed stone cities and took slaves. There was no hint in these hymns that he was anything less than the greatest ideal warrior-god.
In the Brahmanas (commentaries) Indra’s status began to slip. As the power and magic of the Brahmanical ritual increased, fear of Indra did as well. He became the focus of awareness that the gods were being challenged by the ide­ology of ritualism and a “science” of austerities that produced results because of an esoteric knowledge of causality that controlled even the gods. Indra began to lose battles with demons and to need help from brahmins and the renewing power of their rituals and austerities.
In the Epics and Puranas Indra was reduced to the mere leader of demigods who were still called devas but had little power or energy. Indra was pictured as always being afraid of losing his position as Indra, the office of king of the devas that he did in fact keep losing. He began to employ the celestial damsels (apsaras) to distract or seduce sages whose austerities (tapas) were able to con­trol gods and demons. Indra needed help constantly from supreme deities like (Siva, Vishnu, or Devi. Worst of all, Indra’s character had changed. He was no longer a proud and powerful warrior, but a seducer of sage’s wives, using his shape-shifting abilities to deceive them. Drunk and disorderly, he had become a mere clown with the honorary title of king of the gods.
His degradation benefited Brahmanical ritualism, devotionalism (especially in the form of worship of supreme deities), the “spiritual-austerity sciences” (tapasya, yoga, and the like), and the metaphysical philosophies (darsanas like Advaita Vedanta). There were further degradations in his decline: his castration in an episode with Ahalya and Gautama, being cursed with a thousand yonis later made into eyes, and the reduction of the most voluptuous of all the god’s wives, his wife Indrani, to a demon wife, Saci. He was turned into a killer of a priest, cas­trated, beheaded, and cursed to have no temple to worship him. In no other mythology has an orthodox priesthood so treated one of their most sacred deities.