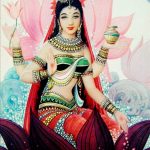 Once while the prostitute Cancalakshmi (“one with moving eyes”) was waiting in the night for her lover, she was attacked and killed by a leopard (or in another version, a tiger). Following her death both the attendants of Vishnu and Yama came to take her soul. They began to argue. servants pointed out the fact that she had sinned throughout her life. Vishnu’s emissaries argued that she had on one occasion in her life gone into a temple to Vishnu and spilled some lime juice on the wall. That act was seen by the all-gracious Vishnu as the service of cleaning the walls of a temple. For that Vishnu had chosen to give her life with him in Vaikuntha, his heaven. So she gained paradise almost by accident.
If one worshipped Vishnu with mindful intent, how much more would one be rewarded, was the message of this myth.