CITRAKETU – A king who longed for a son 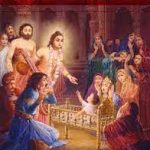 This nested myth within a myth begins with a king and queen being granted a child; they then gain the blessing of becoming gandharvas (celestial musicians), but the story ends with the king cursed to become a demon.
According to the Bhagavata Purana King Citraketu and his queen had been childless for many years before they received a blessing from the sage Angiras. From that blessing came a son. However, not long after the infant died. With great sorrow Citraketu took the body of his son to Angiras. Angiras was being attended by Brahma and the sage Narada. Angiras used his great powers and gave life back to the infant. Upon regaining his life, this child could not recognize his parents and asked Angiras to choose for him his parents from his many previous births. Brahma and Narada became confused with the complex questions on birth and rebirth, but before leaving they gave their spiritual wisdom to King Citraketu.
Citraketu concentrated this mind for eight days on the divine, and both he and his wife were turned into gandharvas. One day while they were enjoying their powers of flight, they flew over Mount Kailasa and saw Parvati sitting on the thighs of Siva. Citraketu laughed. Parvati, enraged by this rude act of Citraketu, cursed him to become a demon. Citraketu was then born as Vritra asura.