CITRANGADA – (2) The daughter of Visvakarma, the celestial architect 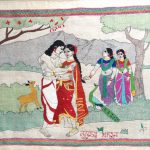 One day while she and her friends were taking a bath in a forest pond, Citrangada saw Prince Suratha, son of Sudeva, walking by. She recognized that Suratha was in love and that she would give herself to him. Her friends tried to restrain her impulse but could not. Learning of this, her father, Visvakarma, cursed her that she would never marry. Citrangada fainted, but her friends believed that she was dead and took her to the cremation ground beside the Sarasvati River. They left her there while they looked for firewood for her pyre. She awoke and, believing that all had abandoned her, attempted to drown her­self in the river. The Sarasvati pushed her into the Gomati River, and it in turn washed her ashore far from home. She awakened this time and saw a sage called Ritadhvaja. She told him her sad story. Ritadhvaja blessed her with a boon that reversed the curse and cursed her father Visvakarma to be reborn a monkey for his cruel deed. Citrangada then married Prince Suratha.