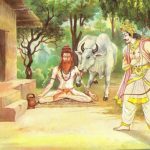 Dadhici had been made from the essence of the world by his father, the great ascetic Bhrigu. He too became an ascetic and engaged in severe tapas (austeri­ties). Indra became afraid that his position of Indrahood (as king of the gods) was threatened by a yogi with such power (siddhi). So Indra sent Alambusha, one of his apsaras (celestial damsels), to deter Dadhici from his austerities. Watching the dance of Alambusha at his hermitage, Dadhici had a seminal discharge, which fell into the river Sarasvati. Sarasvati gave birth to a son named Sarasvata. The sage blessed him with the divine power to cause the rain that would end a twelve-year drought. Sarasvati took their child to her abode and raised him.
Dadhici was also known for his readiness to sacrifice even his own life for a noble cause. Unable to defeat a demon named Vritra, Indra went to Brahma for his advice. (Vritra had been a serpent monster that prevented the rains in Vedic mythology.) In this myth from the epic period, Brahma advised Indra that he would be able to kill Vritrasura with a weapon made of the bone of Dadhici. With much hesitation Indra went to the sage and told him about Brahma’s advice. Without a moment’s reflection Dadhici abandoned his body for this noble cause. Indra killed the demon and his army with the weapon made of Dad- hici’s bone. It became Indra’s powerful vajra (diamond) weapon.