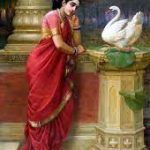 Damayanti was born from the blessing of her childless parents by the sage Dama. She grew into a beauty whose fame reached the attention of Prince Nala. Damayanti also knew of this handsome prince from those divine messengers, the swans. The two fell in love without even meeting.
King Bhima announced a svayamvara (a ksatriya custom in which the princess could select her own husband). Nala set out for the kingdom of Vidarbha with the hope of being chosen by Damayanti but was met by four gods—Indra, Agni, Varuna, and Yama. He did what was proper and promised to do their will. They gave him the power (siddhi) of invisibility to allow him to get past the other suitors and the palace guards so that Nala could tell Damayanti to choose one of them. However, Damayanti did not agree to chose one of the gods. When the contest began, the gods took the shape of Nala so that there were five Nalas in the line of suitors. But love aided Damayanti’s choice. The gods were pleased with the respect they had been given and with the fine characters of the couple. So they blessed them. Nala was given a special blessing from each god: divine presence from Agni, righteous action from Yama, the abil­ity to obtain water with a thought from Varuna, and liberation (moksha) after completing a sacrifice to the gods from Indra.
Their story was nested in a story told by the sage Brihadasva to Dharmapu- tra (another name for Yudhishthira, the oldest Pandava brother), while he was lamenting Arjuna’s absence during their stay in the forest. Arjuna had gone to Kailasa to do austerities and to win a boon from Siva—the divine weapon called Pasupata.
This myth about young love is one of the most popular love stories in Indian literature. It continues with many episodes, including a gambling episode in which Nala lost everything, modeled on another famous gambling story of the Pandavas.