DHRUVA – A great devotee to Vishnu 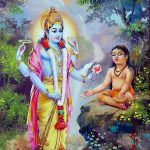 Dhruva was the son of the second wife of Manu, the first human. Manu‘s first wife and son treated Dhruva and his mother badly, yet they both accepted the abuse with gentleness and humility. When he grew up, even though he was a ksatriya (warrior), Dhruva joined a group of rishis (sages) and eventually became one himself. He excelled in austerities (tapas), to the point that he worried Indra, whose throne became hot from Dhruva’s efforts. Because of his devotion to Vishnu, Dhruva was immortalized as the North Star.
Dhruva has been listed among the great devotees in Hindu mythology, like Arjuna, Hanuman, and Prahalada.