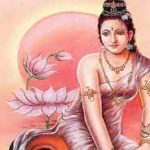 Ghritaci was an apsara, a heavenly nymph. Her beauty was so overwhelming that many great brahmins, whether married rishi (sage) or ascetic, fell victim to her charms. Several, Bharadvaja and Vyasa, saw her and after years of ascetic practice (tapasya) had seminal emissions, followed by miraculous births of sons. Later Bharadvaja saw her again and lost control a second time, only to have a noble daughter, Sirutavati. Others of her conquests included King Pramati, sage Ashthavakra, and sage Visivakarman. She danced at Arjuna’s birthday celebra­tion without any serious disruption. Her myths were a reminder of how easy it was to lose decades of merit from austerities (tapas) for a moment’s pleasure.